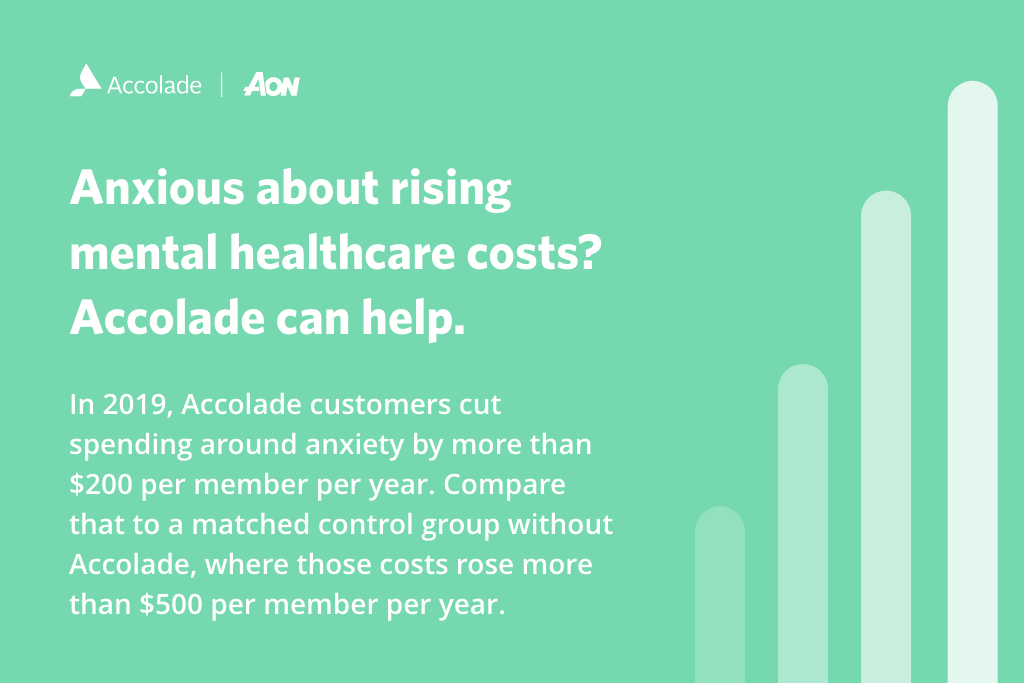 Mental health is an issue that impacts many individuals, and one that’s had a spotlight cast on it in the past year. For employers, making sure that their teams can access the mental healthcare resources they need to be at their best is a growing concern – and one that’s attached to a growing trend line when it comes to costs.

The steadily increasing cost of care for conditions like anxiety and depression have impacted employers’ healthcare expenses, as well as contributing to productivity losses. With Accolade in your corner , though, the trend line is different: companies can support their employees’ mental health, while reducing the overall costs of mental healthcare.

An estimated 48 million Americans are impacted with anxiety according to the National Alliance on Mental Illness (NAMI). This effects many employers across the United States through their healthcare expenses and employee productivity, where the impact of mental health woes can manifest as poor performance, excessive time off and low morale. According to the Anxiety and Depression Association of America, individuals experiencing anxiety are three to five times more likely to visit the doctor and six times more likely to be hospitalized than those not experiencing anxiety. Despite these large numbers, there is still a way companies can contain costs surrounding mental healthcare.

A study by the independent analysts at Aon showed that, compared to a matched control group, Accolade customers in 2019 reduced spending for members with mental anxiety condition by 8% in their first year alone.

These findings were analyzed by comparing Accolade customers the year prior to using their services and the first and - with some members - second years after their programs begun. This group was made up of demographically matched individuals, including age, conditions, comorbidities, geography and other factors.

Prior to partnering with Accolade, these companies spent $9,619 for members with mental anxiety compared to the control group which spent $9,471. After only one year of working with Accolade’s frontline care team of experienced nurses and Health Assistants, members with mental anxiety had their costs decrease to $9,399 for a reduction in costs of 2.3%.

Over the same time period, the matched control group saw healthcare costs for members with mental anxiety rise to $10,019 for an increase of 5.8%. That means not only did Accolade customers spend less than the year prior for members with mental anxiety by employing Accolade’s services – they did so in a year where comparable expenses rose significantly for those not using Accolade.

Thanks to the efforts of the care team, members were able to find the right care and be directed to mental health resources, such as Employee Assistance Programs their employers already offered, as needed. Prior to engaging Accolade, our customers were spending 2% more on members with mental anxiety than a matched control group – after just one year, our customers spent 6% less than the control.

Accolade customers also restrain costs for members experiencing mental mood disorders, including conditions such as depression and bipolar disorder . Around 19.4 million people have a major depressive episode annually, according to NAMI . Unfortunately, these experiences can negatively impact the employer by impacting employee productivity, affecting job satisfaction, and leaving team members unable to contribute to their full potential.

There’s every reason to expect that mental healthcare expenses will continue to rise for companies each year. However, that trend is different with Accolade. By using data to power personalized advocacy for every member, Accolade’s frontline care team helps companies provide the right care for their employees while saving on healthcare expenses at the same time.

To learn more about the results Accolade demonstrated in Aon’s analysis – and how we can help your team achieve similar results - download the full report by filling out the form below!