Competition Brings Us Closer: The Bond a Company Should Have

When we launched our internal Brand New Brand Campaign last October, we were jazzed by the participation level, creativity and company pride displayed by the Accolade team. Via Instagram, over 140 employees submitted - some, multiple - entries showing their artistic interpretations of our new brand colors and logo.

Congrats to our four grand-prize winners, each representing one of our office locations.

Have fun viewing the fun range of ideas among all the entries, featuring Johnny, Jake, Mike and Karel's at the beginning of the

Johnny's festive mural, highlighting the bond between our four locations, is featured on our 2016 holiday card so we're taking a deeper dive to learn more about him, the mural and his grand prize adventure.

Where do you fit in the Accolade team?

I'm a client and customer care analyst with the iCARE Team. We're the IT group who makes sure our clients get any issue taken care like desktop access, opening records and lost passwords. For Accolade employees reading this blog, we support the HAC.

What did you think about the contest? Did it help you and others learn the new brand?

It was pretty intense. My palms were sweaty towards the end of the contest. I was really hoping to win. It was really great for the company because it involved all our sites. We got to see other employee's entries, learn about them, and see their Instagram accounts and their families and lifestyles. Even though we're in different cities, we got to know them.

And the grand prize?

📷It's not everyday you get flown to another city and get to sit in a Sky Box at the Seattle Seahawks stadium and watch them play the Philadelphia Eagles with our CEO. My wife, Crystal, and I were treated real well. It was fun getting to know Jake and Mike. Crystal and I met people that we're still in touch with today on Instagram. 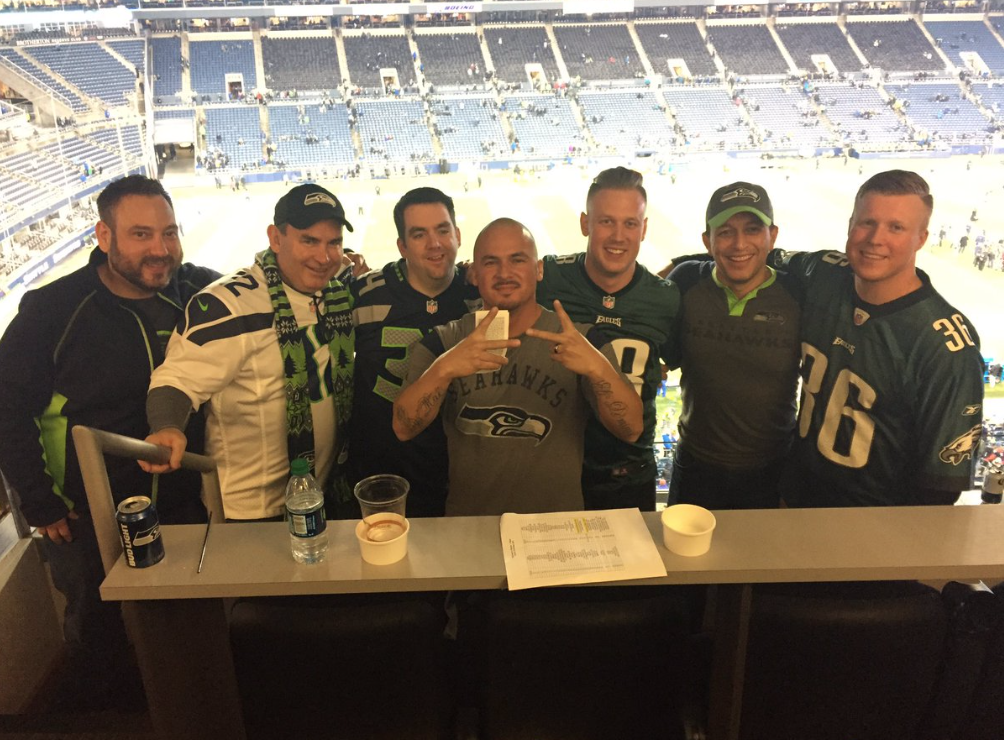 Can you share the significance of your grand prize mural?

I wanted to create something big and colorful and that would have caught anyone's eye. So I thought a mural would be perfect. Drawing the four cities that our offices are located in and having the logo in the middle represents the bond that a company should have. It's not just Plymouth Meeting or Seattle, it's all of us. We're stronger if we work together.

How long did it take you to create?

And who is that young art director in the video?

📷Eli is my four-year-old boy that wants to do everything with dad. He was the one telling me how it would look better and that I was adding too much blue in the sky and too much green on the logo… go figure, a four year old telling dad what to do, that's odd… lol.

He kept asking, Can I help, daddy? So I gave him a place on the wall next to the mural where he added lines here and there.

What did Eli think when you were finished?